skip to main | skip to sidebar

Life sits on the writer and squashes her a bit

Alright, I've been rubbish at updating this thing lately (I wonder how many blogs across the blogosphere begin with that?) so it's time for a quick sum up of recent weeks. If that's possible.

In my last entry I was very excited about my week off, and all the tremendously writerly things I was going to do. Every day. Yep, every day, I would do writerly things.
Well, as often happens, life intervened that week, and I ended up not doing quite as many of the little jaunts that I had planned. Pyra, our small and cheerfully destructive cat had to be taken to the vets to have stitches removed, and this turned out to be more traumatic than I expected. She had a bubble of fluid under the scar, which the vet proceeded to remove with a needle (much to the combined horror of both Pyra and I. Having to hold her down while he carried out this procedure meant I felt like the evilest cat-mummy that has ever lived). It wasn't the cleanest scar, and I spent the next couple of days watching Pye constantly, convinced she would start leaking or something.

Also that week, the electrics in the flat started to play up wildly, resulting in a few days of electrician visits, a further traumatized cat, furniture turned upside down and ripped up floorboards. Oh, and me being stuck in the flat making tea for electrician chaps (who were very nice but, you know, I sorted of wanted to be elsewhere).

All this meant that my writerly trips were rather cut short, but, I got enough done to feel like I had a good week off. I went for a wander up Ludgate Hill, where an important scene happens in A Boy of Blood and Clay, and actually went all the way up to St Paul's (I've never been close enough to touch it before). I walked down Cannon Street to look at the London Stone, which is both tiny and largely unremarked- I peered through the grill to look at it only to find a man looking back at me from behind it; apparently it's just in front of an office window. I went to Monument, looked at some old street names (Fish Street Hill, Pudding Lane) and spent a long time in some pubs writing and writing and writing (the London Stone pub has it's toilets hidden behind a fake bookcase, if you happen to end up in there).

I also had a few trips to our local pub, which is becoming one of my favourite places to write; it's light, spacious and usually quiet, with an "interestingly" arty clientele. I find that I get much more done away from the flat, where the temptation is to watch telly, read or listen to the radio.

So that was my week off. In the week since then, we've had builders in to rip out our bathroom (*sigh*) and having been chucked out the flat early every morning, I have been spending a couple of hours before work writing (in another pub) and consequently, A Boy of Blood and Clay is coming along nicely. Now, if only I had the discipline to get out of bed early every day to do that. Oh, and blog regularly.
If this works, here are a few pictures of the London excursion: 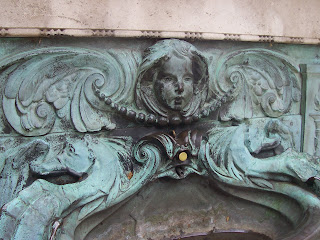 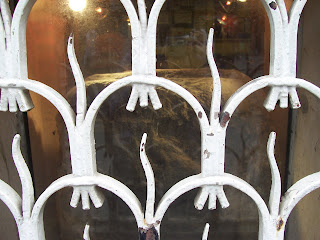 senny dreadful
Jennifer Williams is a writer from South East London with a love of fantastical stories. Previously published in Black Static, Hub magazine and Dark Fiction Magazine, she is currently editing a sword and sorcery novel, The Steel Walk, and hoping to find a home for her fantasy book, Ink for Thieves. When she isn't writing in coffee shops, she prefers to be playing something involving swords and beards on the Xbox. You can find out more at www.sennydreadful.com